Wine turned Ribadavia into a prosperous city and its landscape into a succession of beautiful vineyards.

Ribadavia has been capital of a kingdom, it has been called “Land of the Castles”, and even Cervantes has referred to it as “mother of the wine” in his Exemplary Novels. Therefore, it’s fairly easy to say that Ribadavia is not only wine, but also history and tradition.

And traditionally Ribadavia is associated with the Jewish. A culture that has given the city most of its history and heritage. But especially the Ribeiro, the famous local wine, and its Jewish quarters in its historical center. One of the best preserved in the country, a topic I will bring back in a future post.

If we consider that wine brought Ribadavia fame, it was the Jewish that gave fame to the wine, they revolutionized its production and made international its distribution in a way that even in the middle ages the Ribeiro was being enjoyed in Belgium and Germany.

On the other hand the Jewish quarters are found near the Plaza de la Magdalena and trough the Rúa da Porta Nova de Arriba up to the castle, nonetheless its limits are purely symbolical and it is known that Jewish and Christians lived peacefully together. Even now it’s difficult to find a palpable distinction between one place and the other, the same narrow streets with the same powerful arcades run through the city giving an image of equality between religions and cultures.

It was in 1492, when Jewish were expelled, that most of them had the need to convert to Christianity or run away to Portugal to wait for the Inquisidores to leave town. It is not far in time from this point that one of Ribadavia’s most transcendental episode occurred. The “Malsín” was an inquisitorial process to discover false converts among those who were supposed to convert to Christianity and its subsequent persecution. This episode along the representation of a traditional Jewish wedding is the main course of “A Festa da Istoria de Ribadavia”, an effort to show the cultural and historical wealth of the town and to remember the confluence of religions and cultures that made an impact on Ribadavia. It is such a powerful event that it started in 1693, with a hiatus between 1868 and 1989.

The Festa takes place in the summer and among everything else is a party to celebrate Ribadavia and its people, it takes so much effort and work and the results are so memorable that it has become a national reference and one of the most important festivities in Spain and north of Portugal.

You can even trade your regular money for Maravedíes (the currency used in the middle ages). ¿Who wouldn’t want to buy Jewish traditional delicacies with medieval currency? 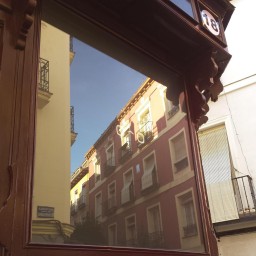